Oh what a great Sunday afternoon we've had.  I was outside bringing in the laundry I washed yesterday.  It was a very overcast morning and I knew it was cold and I thought I might rain (hence, bring in the clothes!) I looked around and it looked like it was spitting teeny tiny snow flakes.  I wasn't sure if it was snow or dust junk that's in the air from all the coal being burned and the smoke it creates.  I thought it was snow, but you never know.  About 30 minutes later there was no doubt, it was snow.  Big beautiful flakes were raining down on us.  I bundled the girls and myself up and we went out to play.  A couple of graduate students

who are friends of ours came and joined us.  We all had a ball.  First we started with a snowball fight between just us, then we took it out to the street here on campus by the guest house and made snowballs while the girls nailed all the passersby. Most of the students went along with it, running and squeeling while the girls tried to throw their snowballs at them.  Of course their aim really isn't very good and 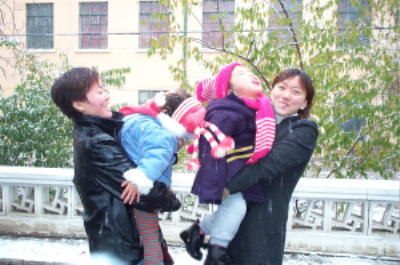 most of the snowballs landed at the students feet.  The girls had a great time playing.

I was told that the undergraduate students, most all of whom live on campus in dorms, have "snow duty."  They are assigned sidewalks to shovel every time it snows.  (Can you see college students  in America doing that?) I didn't see anyone out shoveling, but there isn't that much snow......yet!  I must say I'm glad they've finally turned the heat on.  I was blessed and have one of the warmest rooms in the guesthouse.  Phillip the teacher from New York has the coldest room.  He hangs out in our room quite a bit.  We play Mancala and watch DVD's with the girls.  Right now it's 3 games Phillip and 2 for me.  I had been really winning a lot of the games, but then Phillip read the rules and discovered I'd been playing the game wrong, so we had to start our score keeping over.


The snow has created one problem for me.  The girls now want to open the Christmas presents my sister brought to China and left for us last September.  Last year when we were at home, I told Julie and Charlie that Christmas came when it snowed.  We were planning on traveling to Kansas City where my sister lives and there was snow forecasted.  I had no idea they would remember that, but they did, so now they want to open presents.  I had to tell them it hasn't snowed in Oklahoma yet so we couldn't open presents just now.