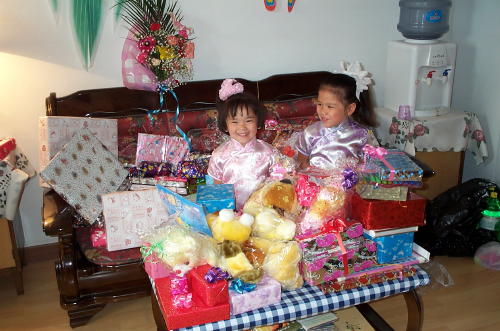 Julie and Charlie celebrated their birthdays together on June 23rd. A joint party was planned so Charlie would have guests as well.  Her birthday falls during the summer break and all my students would have gone home, hence the double party (and if the truth was really known, I am too tired to do this again!!!!!)

For weeks I'd been working on a pinata.  The girl's decided they wanted a panda bear....ok, so how do I make a panda?????  Well several balloons later, I had my start.  I borrowed Lisa McClure's idea and asked the apc (a parent's China) and CCAI (Chinese Children Adoption Interntational, the adoption agency I used to get Julie and Charlie) email lists members to send me their cast off McDonald's and Burger King Happy Meal type toys.  (My one, well one of the very few, gripes about China is the low quality of childrens' toys, the ones you get over here break so easily...it's very frustrating.  McD's Happy Meal Toys are so much better) You would not believe how there people all came through for us.  The pinata was stuffed so full of toys I had to prop him up until right before it was time to break into him.  My mom also send a bunch of candy (some of which never made it to the pinata...the girls found it).  My heartfelt thanks to all of the generous people who helped us out in our time of need.  I would list everyone's names, but I don't want to infringe on their privacy...but I am indebted to you all.

***** Side note***I was totally overwhelmed at the generosity of the adoption community. Here I am a complete stranger asking people to send me things....and postage for most was quite expensive. There were so many toys and they continue to arrive that today I took three big sacks full, plus a garbage sack full of stuffed animals that were gifts to my daughters (they got so many they could never possibly pay for all of them) over to the orphanage this morning.  I wish you all could have seen the faces on the children, nannies and orphanage director.  Jinzhou's orphanage is very small and they have very little money, but today it was like Christmas.  I've never seen so many excited, screaming, happy little faces in my life.  My thanks to all of you who sent packages that allowed me to play Santa Claus today....it was wonderful.

It had been raining for several days, but the morning of the party it had

stopped.  I was so thankful as I had no back-up plan.  Katie, Adam and Elizabeth (some of the American foreign teachers and students) showed up at 8:30 along with a few

of my students to start decorating.  We had been sent many decorations and I'd bought some as well.  When it was all out, the courtyard of the guest house took on a very festive air.

Our guests began to arrive at 10:00, the invitation's all said 10:30, but in China it is ok to arrive early....needless to say I wasn't ready.  But it was fine, the girls' teachers helped me dress them right there in the court yard.  I'd invited all the students from my classes and all the

children in Julie and Charlie's class, along with their parents.  I think there were close to 200 people there....it was a mad house.  Fortunately the girls teachers were there and I'm here to tell you don't ever have a party for 3 to 5 year olds with them!!!!  I tried to organize musical chairs with Leanne interpreting for me...didn't go well until the teachers took over.  Then all the children got involved.

After we had played musical chairs, we broke out the pinata.  After several attempted by Julie and Charlie's classmates, we had to enlist the

help of one of Leanne's older English students to finally get to the prizes inside.  After that it was a mad house of children rushing in to gather prizes.  I had saved back a huge box of toy's, so while the children where on the ground scrambling for toys I was scattering more of them around.  They were so pleased with their party favors!  One young man was especially happy with his treasure.....the panda's head (the pinata was decapitated to get into it)

Cake and ice cream followed.  We all sang, well those of us who knew the

words, Happy Birthday to Julie and Charlie, then the teachers had their class mates sing it to them in Chinese.  It was very sweet.

The teachers then had all the children

perform some of the songs they'd learned at kindergarten.

I'm pretty sure everyone had a great time.  Here are just some shot's of the party.